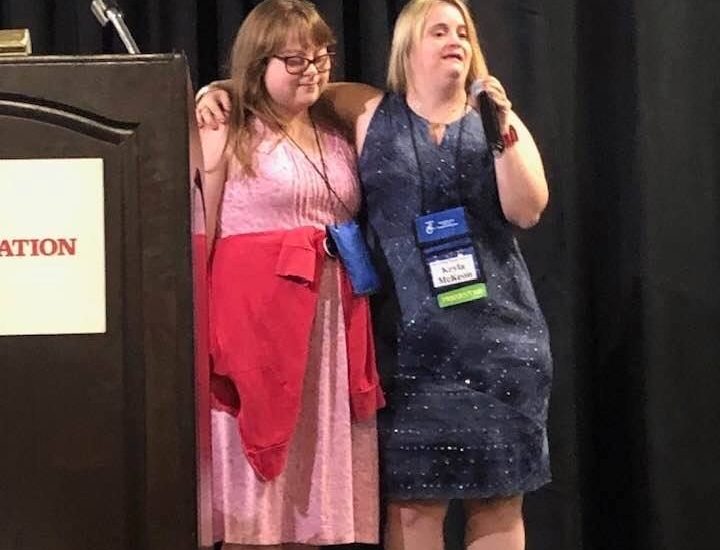 Back in October I was asked to speak at a summit in Springfield Illinois. The summit was called Speak Up and Speak Out. It was a two-day conference filled with speakers, and panel discussions. The first day our speaker was Rebecca and she spoke on open spaces and how she lives her life. Rebecca has dwarfism. She also spoke about her family, her job as well as her education. She was very interesting. She used to work for her Congressman and also did work for Barack Obama at an event they both were attending. She had the audience engaged and she also works with legislation that impacts us today.

During the conference they had different breakout sessions. It was hard to pick which session to attend. In the morning I went to the sexuality sessions. It was interactive. Mary Mathis and Linda Sandman moderated the session and discussed that disability or not, we are capable of finding the right person. They went through the motions of asking someone out on a date the appropriate way.

During lunch they had a couple of speakers. The governor spoke as well as a Congresswomen. After they spoke, they brought up a panel discussion about their experiences as well their advice. When they opened the floor up to questions for self-advocates they spoke locally and nationally.

In the afternoon there were other sessions, I went into the Telling your Story to the Media. This is another way to share your voice worldwide in all kinds of advocacy, self-advocacy being the most important. It’s the most important part, sharing our story. It’s a way to let Congress remember us when they have a bill in front them.

Dinner that night was an open mic night. Throughout the conference, every time someone says Speak Up, the rest of us participants had to yell back Speak Out. This is where self-advocates went on stage and said what was on their minds and what was important to them. What we want for our future.

That night after the open mic night they had a dance for us. Costumes were optional and some of the costumes were pretty cool. It was another way for us to network and hang out.

The second day of the conference was pretty much the same with public speakers. I was the first keynote speaker talking about my job and how I came to be the first registered lobbyist with Down Syndrome. After I spoke, I took some questions from the audience.

When I was done my friend Rob Snow came up and he spoke. He talked about his background and his son Henry who has Down Syndrome. He manages The Improvaneers which is a troupe cast of individuals with Down syndrome . Proving how improv can enhance social and workplace opportunities.

His workshops travel pretty much everywhere. Rob speaks on behalf of The Improvaneers. Some of the workshops he does he brings in The Troupe and demonstrates what they do. He also speaks on other topics. At this conference he spoke on public speaking and giving advice on how we should present ourselves, the audience we should be presenting to, our message. He was very interesting and informative.

The Speak Up and Speak Out summit was intriguing. I like meeting new people and having networking opportunities.

ESPN and CARING with Congress