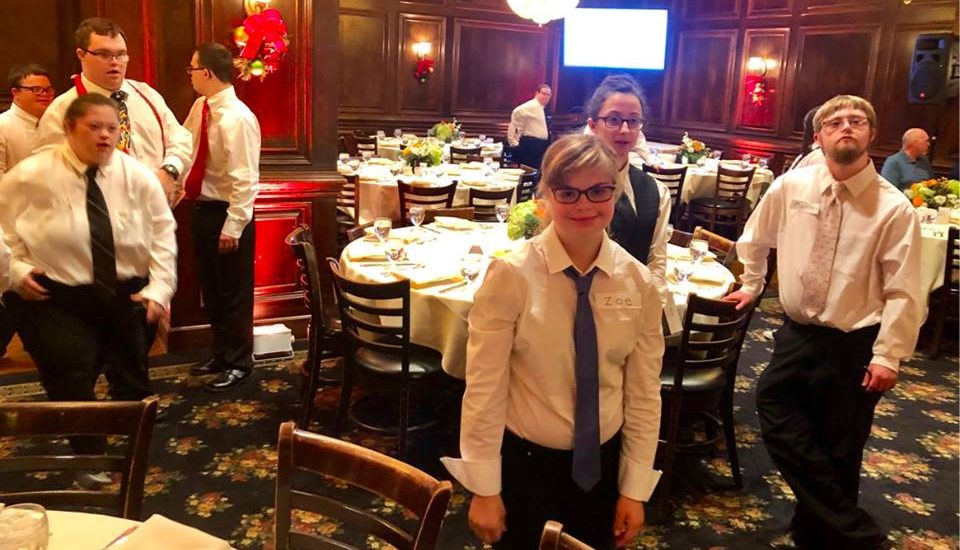 Watching a video back at home in San Rafael on our family computer, I watched a video about C-21. Hmm, I thought, perhaps this is my chance to represent my disability community. I participated in a dinner event called C-21 which was hosted by the National Down Syndrome Society at Maggianos Little Italy restaurant in Dallas, Texas. The restaurant is all run by people with Down syndrome. On Tuesday, December 4th, I took part in a training that taught me how to serve people food and drinks at a real restaurant. The way it worked was through role playing. I practiced handing “patrons”- who were actually teachers- drinks and dishes, and silverware along with putting them away, and introducing myself as their server for the evening. All throughout that day, I waited with bated breath, my anticipation reaching new levels. There was a nervous excitement pit in my stomach that everyone gets when they try something new for the first time.

Right after lunch, it was time for my training, my dad just hung around embarrassing me the whole time. With other young men and women with Down syndrome, we practiced what we would do if we were working at a restaurant. As we were role-playing, my dad took pictures of me, much to my chagrin, but it was okay since he got a work phone call and was not paying attention to me which helps me focus better.

The day went by without a hitch. From picking my mother up at the airport, to relaxing with my family, to getting ready for the fun evening ahead, I had a great time. That afternoon I got dressed in the proper uniform- collared, white button-down long-sleeved t-shirt with cuffs pulled up, dark blue tie, black pants, and black boots with gold side zippers. My mom did my makeup, by helping me putting on some mascara and sparkly pink eye shadow to emphasize my pretty ocean blue eyes, and some Burnt Bees tinted dark reddish-purple chapstick. At 3:45 on the dot, I arrived at Maggianos to help set up for the event.

Our first task was to make gift bags for the guests and each one of us went two rounds before that was finished. As a model for the other young adults, I showed them what to do by introducing myself and asking for the patrons for their drink and food orders. We were then allowed to eat an early dinner of salad and gluten-free pasta dishes and just hang out until the guests were to come. As the flow of people came, I stood off to the side, welcoming and greeting them to the dinner. I then went to my assigned table, table number seven, and continue to wait for it to fill up. I introduced myself and made small talk for a few minutes, then served them starter salads. Once they were done eating, I cleared the plates away and took their order for their main meals. I gave them drinks of liquor- beer and wine. The scene before me was constant chatter as people got to know each other, which made the noise level increase. A woman, who is the president of the National Down Syndrome Society, stood at the podium at the front of the room, ready for her presentation to begin, waiting for the audience to quiet down.

As people were eating their dinners, she thanked us for coming and told us about law syndrome. Law syndrome means that there are laws that does not allow people with any disabilities to become employed. She then told us about Voya, which is a program for caregivers to give 24 hour support for people with Down syndrome. In a video, which was showed to the guests and workers, it gave statistics about Voya and people who have Down syndrome and their employment prospects. After the video played and my table was done eating, I cleared the dishes and cutlery away. I came back in time to hear two board members share how having Down syndrome impacts them. There were very moving speeches and one was made by my new friend, Bailey. When the speeches were over, I served my table the dessert which was crescent moon vanilla icing cookies and cheesecake. Unfortunately, for me, I was drooling, because it looked so good. There were more speeches made and then the party kind of died down. As people left, I handed them gift bags to take home with them and thanked them for coming. I saw my grandmother and her husband, who were also at the event, and hugged them. I went back to my family members who were present and talked to some friends the we made the event. I had gotten Bailey’s phone number so we can text and stay in contact. I have a really good feeling that we are going to become fast friends. She lives in Texas though, but we will visit each other the next time I am in Texas or she is in California. We got our gift bags- I am going to give mine to my younger brother as kind of a care package since he is still feeling slightly sick from a vicious cold. Back at my aunt and uncle’s house, I almost immediately did most of my packing, got ready for bed, and went to asleep.

5:00 this Thursday morning when it was still dark out, my mom woke me up. I had slept fairly well, so I was not annoyed by her. I had taken my before breakfast medication, did my business, washed my hands thoroughly since this is the season that everyone gets sick, did my feet exercises, brushed my teeth and used mouthwash, washed and moisturized my face, put my hair up in a messy bun, and put on clear lip balm. I had packed my toiletries in my whimsical bag and put it in my suitcase along with my pajamas- a big orange t-shirt advocating for kids with Down syndrome and warm green pants. Slinging my backpack over my shoulders, I joined my parents in the car to go to the airport to catch our 7:05 flight back home.

Reflecting back on this experience, I have learned so much, met some incredible people, and in being a part of this event helped me realize even more that my passion is advocating for people with disabilities and for rights for them. I have learned about how laws are holding this group of individuals back from being employed and stories from others about how they or someone they are close to who has Down syndrome did not stop them from doing what they love. The people who I have met all are special in their own ways, which will help them excel in life. Being able to be a part of a historical movement was not only humbling to me, but also heightened my life’s passion. Ever since I was little, I knew that what I had to say matters and is valuable to all who know me. As I grew up, I developed a love for speaking my beliefs and I knew that my voice would help empower and inspire others to own who they are and love themselves unconditionally. If there is one thing I would like to do for the rest of my life, it is to advocate for rights and for people with disabilities. I cannot even begin to describe my relationship with my passion for advocating- it is simply just a part of my very being and its magic will always motivate me to become a better person. The memories that I have made by C-21 are irreplaceable and are the ones I will treasure in my heart forever. In short, thank you.

Speak Up and Speak Out

Back in October I was asked to speak at a summit in Springfield Illinois. The…